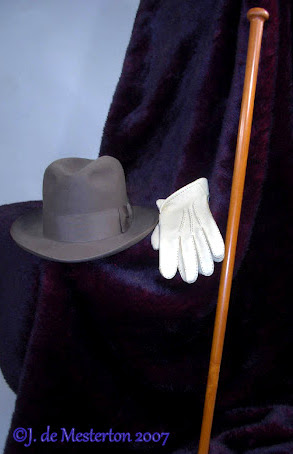 The Gentleman’s Trifecta is my husband’s term for the things represented in this photograph that we took in 2007.

I will explain a little more in the following editorial, which I wrote and published on Elegant Survival in 2010:

In this stylish drawing of a man, you don’t see a skinny jacket that is bursting open to expose sad trousers that hang at the hip, a bulging shirt and too-long tie. What we see here is a man who wears his trousers at the right length, ones that don’t pile-up like discarded potato sacks on top of his shoes, and which come up to the actual human waist, thereby visually lengthening his legs. And we see the gentleman’s traditional accessories: hat, gloves and walking-stick, each of which serves a purpose, such as protection from the elements, enthusiastic pigeons, dirt, germs, roving animals, and whoever may dare to attack him or anyone else in his immediate vicinity; the gentleman is always well-prepared for a stroll down today’s mean streets. Alas, this picture is clipped from an advert by Burberrys that appears in one of my 1930s Sphere magazines. Today’s men, in general, look like short, dumpy cads in clothes that are designed to distort human proportions. (Add the slovenly yet popular three-day growth beard to complete a tragic modern image.) Never in history has so much sartorial splendour been readily accessible, and yet men have seldom looked worse. It doesn’t cost any more to dress correctly than it does to do it badly, especially since some of the ghastliest clothes are going for the highest prices. There are few contemporary examples of elegant dressing in trendy venues and magazines. Help yourself by not following fashion, but instead by looking toward the best elements of the past for useful examples of tasteful masculine dress.